According to the Centers for Disease Control, COPD, or Chronic Obstructive Pulmonary Disease, is the fourth leading cause of death in the United States. More than 15 million Americans are affected by COPD, and more than 150,000 Americans die due to COPD annually. That is one death every 4 minutes. COPD refers to a group of respiratory diseases such as chronic bronchitis and emphysema. COPD primarily affects middle-aged and elderly individuals; however, that does not mean that atypical cases in younger individuals do not occur.

The primary cause of COPD is first- or second-hand tobacco smoke exposure. Tobacco smoke is considered to be the cause of 9 out of 10 cases of COPD. Although tobacco smoke is the most common cause, it is not the only cause. Air pollutants, fumes from work, and genetics can play a role in COPD formation as well.

The American Lung Association states that some risk factors for developing COPD that are not from tobacco use are:

Some experts believe that these higher rates of comorbidity are due to the inflammation of the lungs and in the blood. There is evidence to support that this inflammation can cause some damage to the heart, muscles, and bones of individuals with COPD.

There are some things you can do to limit your risk of developing COPD and effective management:

What are the stages of COPD? 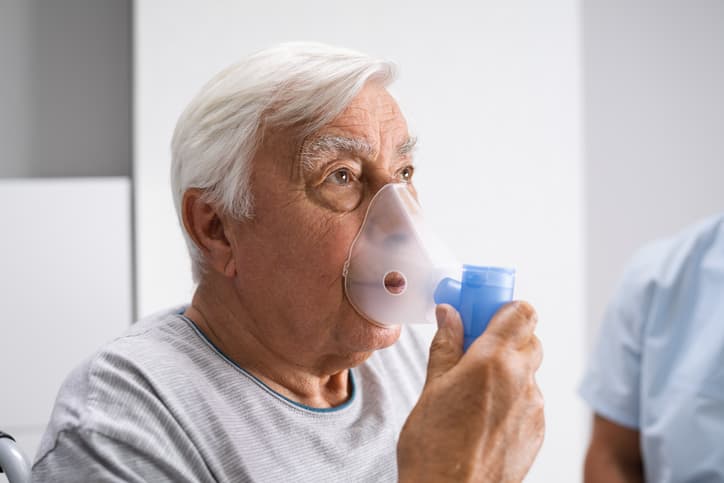 The severity of COPD stages is determined by the results of a spirometry/lung function test. This test implements a comparison between healthy individuals in your age category, race, and height. During a spirometry test, the technician will ask you to take a deep breath and blow all of the air from your lungs as quickly as possible into a mouthpiece. You will then continue to blow into the mouthpiece for as long as possible.

The machine then calculates two numbers, the amount of air you blew out initially and the amount of air you were able to blow out continuously. These values are then compared to individuals of your same age, race, and height who have healthy lungs. These values are referred to as FEV1 and FVC. Based on your results, a medical professional will indicate which stage of COPD you fall into. These stages are classified with a number from Grade 1 to Grade 4, and a letter from Group A to Group D. This information helps your physician determine how to monitor and treat your COPD. The grades can be described as Mild (Grade 1), Moderate (Grade 2), Severe (Grade 3), and Very Severe (Grade 4). These grades indicate how obstructed your airways appear to be.

Your COPD group is determined by an assessment of your symptoms. An assessment describes your range from mild to severe and your risk of having a flare-up. This risk is measured by the number of past flare-ups you’ve experienced. If you have experienced no flare-ups in the previous year, you would be classified as low. If you have experienced only one flare-up but did not require medical attention, you would still be considered low. If you have been treated in the hospital within the last year due to a flare-up, you would be classified as high-risk. An individual who experiences two or more flare-ups within a year, even without hospitalization, would be considered high-risk as well. Groups are categorized as:

How is COPD Treated?

COPD treatment is something you and your doctor will discuss and decide on together. There is no cure for COPD; however, no cure is not indicative of a shorter lifespan. If appropriately managed and lifestyle changes are implemented, an individual with COPD can still live a long and full life. Treatment is intended to slow the rate of progression and manage the unpleasant symptoms associated with COPD. If you or a loved one have experienced any of the stated symptoms and may be concerned that you may be suffering from COPD, speak to your doctor. Early intervention could mean more effective treatment and slower progression.